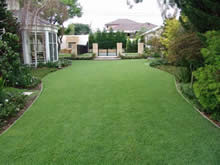 If you’re considering a different kind of turf for your yard then it would be worthwhile considering Empire Zoyzia, a fairly new player on the block, but a lawn that looks stunning.

A customer in Burns Beach regularly has people knock on his door and ask what kind of lawn he has because it looks so distinct from all the others.

While its a great looking turf it is also one of the most expensive at around $15-16/sqm + delivery and GST.

Here’s a short spiel from the ‘Empire’ people and you can read more at their website here.

EMPIRE™ Turf grows Australia Wide and provides a lawn grass which is easy to look after. It has a relatively fine leaf which is soft to touch, excellent wear tolerance and thrives in extreme heat and humidity.

EMPIRE™ is good in the shade and keeps a good winter colour and it can generally outcompete the weeds once established. EMPIRE™ ZOYSIA generally requires less watering & less mowing than any other commercially grown lawn in Australia.