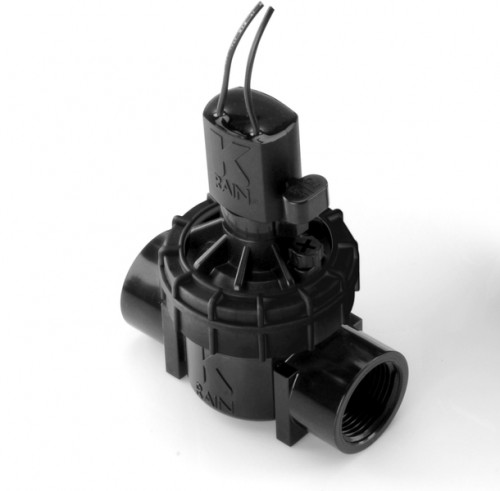 I went to look at a job this week where the sprinklers were working, but barely so.

Each station would dribble a small amount of water, but there was nowhere near enough to run the system. What was going on?…

I guess the logical cause had to be the master solenoid being stuck and thereby reducing pressure all round. However I have changed these over before only to see no change in the performance so I was cautious, even moreso because the master was buried 600ml deep, encased in bricks and covered in rocks and rubble. Not fun to get to!

The first check is always to make sure the water meter is fully on and operating properly – which it was. Then to begin digging…

When I finally uncovered the MV I discovered it was a jar top Richdel, and that was encouraging because often you can just screw the stop off, replace the guts and be done.

So I unscrewed the top section and removed it. The diaphragm was stuck to the lower section of the solenoid body and as I peeled it away the centre spindle came with it.

My hunch was that the diaphragm was no longer opening sufficiently to let water thru and with the spindle now removed it was never going to work properly.

I screwed it all back together with a new diaphragm to see what would happen. Nothing changed.

So I cut the main pipe just after the MV to see what kind of water flow was coming thru. It was lousy, obviously restricted, so the only option was to dig it all up and replace it. A little while later a new master valve proved to be the answer and one very happy homeowner had his sprinklers operating again.

Most retic is a logical process of elimination, as well as the occasional bit of trial and error!